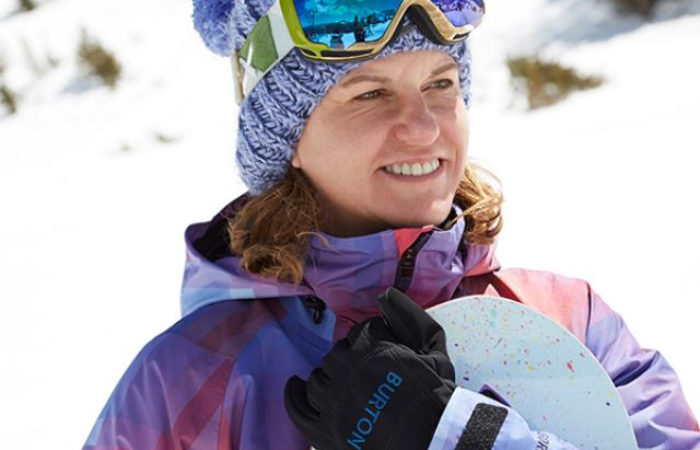 Marketing to women: Pink it and shrink it doesn’t work

Donna Carpenter has made Burton an equal opportunities employer. She is certain: It matters that women make decisions for the company.

Brand of Choice for Women

Donna Carpenter and her husband Jake Burton Carpenter are the owners of Burton Snowboards, the world’s leading snowboarding company. Donna has held a multitude of roles at Burton since 1982. The company originally operated out of her Vermont barn and now has offices in Vermont, Japan, Austria, California and Australia. Donna became President of Burton in December 2011, assuming leadership of the company’s global human resources. She puts a main focus on her efforts to ensure that Burton is an employer and brand of choice for women.

When did you first realize something needed to be done about women in board sports and at Burton in particular?

“To be really honest it was my husband Jake. About thirteen years ago he was in a meeting with all of our global directors, there were about 25 people in the room and there were three women. He said to me: ‘This isn’t good. This can’t be good. This can’t go well for the future of our company if we’re going to be male dominated.’ And I thought about it: When we first started we were very balanced. We had as much women as men working for us, women were as much the pioneers of the sport. But when we grew very quickly in the 80s and 90s we were taking employees from skateboarding, skiing and surfing, which are all pretty male dominated. So we were taking on this culture without realizing it.”

What was the next step after realizing the lack of women at your company?

“Jake asked me: ‘Can you see what you can do about recruiting more women? And also retain more women and advance more women.’ I think as an entrepreneur he knew that we needed women’s talent. And in order to be innovative, you have to have the diversity – or you stop innovating.”

How do you encourage women to apply?

“What I have learned is that we can encourage women by having role models. We started by looking at maternity, what happened after a woman has children and looked at how we can retain her over time. Because you invest so much in your employees, you don’t want them to turn around and leave after years with the company. A lot of women told me it was very difficult to see themselves at Burton for a very long time because they didn’t see mothers in positions of leadership.”

What did you change?

“I worked very proactively especially in recruiting. When we offered a leadership position we would be getting 90 percent male resumes. So we started looking at how and where women were applying. And we said you have to have a female finalist as a candidate. We’re not saying you have to hire a woman, but you have to find a talented woman for every leadership position as a finalist. But is has got to start with a commitment that a young woman can see that she can balance working and having a family in your company. Now we have that. We have women in leadership positions with families.”

That sounds like you have a very open work culture at Burton. Do you talk to all employees a lot?

“We do, and we also formalized that. We have surveys, we have focus groups, I also interviewed 50 former employees myself and asked them: ‘What are the challenges? What are the opportunities?’ Then I brought one woman from each department together to talk about ‘How do we recruit more women? How do we retain them? How do we advance them?’ I thought that we would stay together as a group for only a couple of weeks, but after thirteen years we are still together and do amazing things.”

How many women in leadership positions work at your company now?

“We have gone from ten percent thirteen years ago to fourty percent today.”

Do you want to achieve even more?

Has it changed your company’s culture to have more women there?

“Absolutely. In the beginning there was a bit of a backlash, because men were saying ‘What is this all about?’, ‘Women are going to get preferential treatment when we hire’. But then they see that we start to address things that concern them too. We have become a better company for all parents. We now pay for childcare. We instituted paid paternity leave also for men. It’s also very important that we now have a culture of mentoring.”

Why is mentoring important?

“Besides wanting flexibility women said to me: ‘I crave a mentor. Someone I can go to and talk about my career, what my next steps are …’ With men that happens more naturally, you have informal mentoring relationships. So we did this very formal mentoring program with women starting about ten years ago. It was so successful that men started saying ‘We want that, too’. So now the program includes both men and women.”

Was your decision to focus on better diversity more personally driven or a strategic decision?

“The community started as men and women. And all of a sudden you see the community becoming very male dominated. I wanted to make sure that women always felt welcome and part of the community. So it was a personal decision.”

Do you have more female customers now?

“We do. I am I big believer that you cannot reach the female customer unless you have women in leadership and women making strategic decisions for the company. You’re not going to be able to do it. In the beginning we had a children’s snowboard for boys that had robots on it. A woman in our soft goods department then said: ‘I know there’s a demand for a girls’ snowboard.’ So we went to graphics and said: ‘You have to give us a girls’ snowboard.’ They just turned it purple and it still had robots on it. We laughed and said: ‘No one is going to buy it. A girl doesn’t want it, because it has robots and a boy won’t buy it, because it’s purple. And then you’re going to say girls don’t want snowboards.’ So we insisted that they put little girls’ graphics on the board like butterflies. It exceeded pre-season projections by 250 percent. Everyone wanted to have it. But the guys didn’t know how to do it. They just said ‘We’ll pink it and shrink it.’ That doesn’t work. Women consumers see right through that. They don’t want that.”

Is it important to have women in positions across the company?

“When I first did this I wasn’t going to creative or marketing or product because we had been pioneers of womens’ products and women team riders. We had equal price money from the beginning. It didn’t take me long to figure out who was sitting at the table making decisions for the women’s market and I know now: It matters who’s sitting there and it’s important to have women there. We promoted a woman who has been with us for fourteen years to senior vice president of marketing. You know when you have a woman in that position marketing to women is not just an afterthought. The other area where it has been really important to have women is engineering. It is difficult to find women engineers but we need them to help us drive the women’s business. For the last five years we had an internship specifically for women engineers and we hire quite a few of them. We now have a director of women’s hard goods. That’s something we couldn’t have imagined ten years ago. You can’t drive the external business without the internal advancement.”

Looking at the actual sport: What can you do to support female athletes?

“We’ve always supported women athletes, but I think that we haven’t done enough in terms of just encouraging them to participate. Women can still perceive it as very intimidating, as an action sport, as an extreme sport. Even the images that we were using: That solo guy jumping 30 feet out of a half pipe, that doesn’t invite women into our sport. We have to show a side of snowboarding that is much more about the lifestyle. Guys have these very specific magazines, car magazines, motorcycling, fishing, whereas women look at it much more holistically, much more in a social context. Snowboarding is such a wonderful lifestyle: It’s about travelling and mountains and being with friends and enjoying the snow. We have to tell a different story for women.”

How did your collaboration with Salt’n’Pepa come about?

“We were approached by an organization called Lifebeat. Their mission is to educate young people about HIV and AIDS. They came to us because a lot of young people aren’t aware of it as they used to be. They came to us and asked if we’d like to partner with a musician and do a snowboard to help this cause. We thought Salt’n’Pepa would be perfect because they were really breaking gender barriers in the rap world for a long time.”

What challenges does snowboarding face today?

“Our biggest challenge – honestly – is global warming and what’s happening to our planet. So we’re doing much more than we ever have in terms of sustainability, in terms of the environment, in terms of making our products as safe as possible and in speaking out for bigger changes. The economy is another challenge. I think the snowboarding industry was hit even harder than for example the skiing industry because or demographic is younger. In Italy and Spain the unemployment rate for younger people has risen steadily. Of course that affects us.”

How important is the European market for you?

“Europe has always been very important. My husband and I came to Europe thirty years ago, not because we had a big plan for Europe but we loved it, and we wanted to live there before we had children. I can remember everybody saying: ‘Europe will never work because they’re so traditional. Europeans like skiing.’ But it was the opposite! They were ready to try something new. They embraced the sport. It’s as big in Europe as it is in the US. The markets are about the same size.”

Jennifer Dulski: “You have to take fun seriously”. Read on

Everyday I’m hustlin’: The ultimate guide to staying motivated in Berlin. Read on