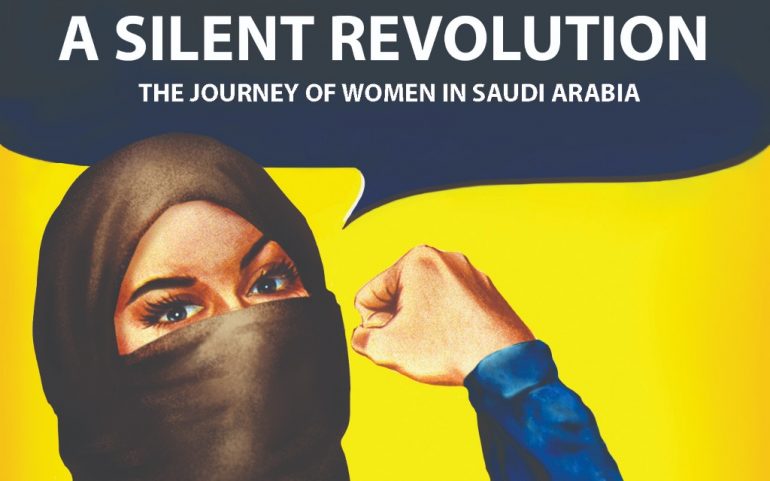 Let’s play a word association game. I will throw out: Women in Saudi Arabia.

What comes to mind?

Long black veils and the legal ban on driving cars, am I right?

You know I am.

In most cases, this unfortunately is the prevailing one-dimensional view of women in my country, one of the most misunderstood places in the world.

That’s why five years ago, my business partner Dania and I began working on a documentary film,   “A Silent Revolution,‘‘ about the quiet-yet-effective struggle of the brave women of Saudi Arabia.

To the outside world, the anonymous heroes we had the privilege of interviewing for our film may look like prisoners, captives of decades of tradition, intolerance and repression.

But beneath the veils and beyond the western stereotypes, we met fearless warriors, inspiring patriots, women willing to put it all on the line for justice, equal opportunity and a better working day.

Yes, we had an advantage in making our film, which was just shown in Berlin on Thursday, Feb. 22 at the Moviemento cinema in Kreuzberg-Neukoelln in Berlin. The event was hosted by the organization “Film ohne Grenzen”.

We’re both Saudi women, products of Jeddah, our country’s cultural boom town on the Red Sea coast, a hub for arts and fashion only a few hundred kilometers from Mecca.

Starting in 2013, we began to collect the personal stories of pioneering women from across Saudi Arabia – young women, older women, married women, unmarried women, women who have literally reached the mountaintop, and women who have opened doors for thousands of others.

Women such as Siddiqa Sharafudin, who started the first school for girls in Saudi Arabia in the 1960s in Jeddah, called Nassifiya. It’s still there today. Siddiqa,
who was Dania’s grandmother, used patience and persistence to blaze one of the
first trails for women in the Kingdom.

Women such as Dr. Lama Al Sulaiman, a biochemist and mother of four who became the first deputy director of the chamber of commerce in Saudi Arabia. A week before assuming her post at the Jeddah Chamber of Commerce and Industry in 2009, doctors told Al Sulaiman she had beaten breast cancer.

Then there’s Muna AbuSulayman, perhaps the most recognizable Saudi woman in the world. As co-host of talk show “Kalam Nawaem,‘‘ the Arab equivalent of The View, AbuSulayman spoke out frankly on women’s rights, Arab and Saudi society and the need to build bridges between East and West.

Like many Saudi women, AbuSulayman’s path wasn’t easy. She received death threats from viewers, and was even shunned by some members of her extended family.

But like Raha Moharrak, none of the women in “A Silent Revolution‘‘ gave up.
Moharrak is perhaps one of the most unexpected of Saudi women heroes. She is a professional mountain climber, and the first Saudi woman to scale the world’s seven tallest peaks, including Mount Everest. That would be a feat for any woman, or man for that matter, much less for a Saudi woman.

But that is the improbable yet compelling reality of life in today’s modern Saudi
Arabia, a country opening itself to the world as it opens its society to women.
Just in my own field, the film industry, the changes are breathtaking.

For years as filmmakers, Dania and I could only aspire to make corporate
promotional films. There wasn’t an avenue for artistic expression in film
because there wasn’t a film industry. But that is all changing under the Vision
2030 reform program of King Salman and Crown Prince Mohammad bin Salman. The first movie theaters – for men and women – are to open in April.

Saudi has ambitious plans to create its own film industry out of the ancient sands that has covered millenia of history. Dania and I – who self-financed our 54-minute documentary – are part of that wave. Our film editor is Kevin G. King, a seven-time Emmy winner from Burbank, California, who is committed to bringing the true story of Saudi women to the broader world.

Just the fact that the Saudi government – for years enforcers of a strict, male-dominated world — is supporting the trip of two Saudi women filmmakers to
Berlin speaks volumes about the changes underway in our country. So too do proven successes such as “Wadjda,‘‘ the critically acclaimed 2012 film by another
Saudi female director, Haifaa al-Mansour, which was nominated for a BAFTA
award.

Or “Barakah Meets Barakah,‘‘ the modern-day, quirky love story set in Jeddah by
Saudi director Mahmoud Sabbagh, which won a prize at the Berlinale in 2016.

At one point in our film, one of our protagonists, Dr. Lama Al Sulaiman, says: “I
don’t know if I’m becoming a feminist or not. But Saudi women are powerful.
They are powerful in this country because they endure.‘‘

That’s something both Dania and I can relate to. When we created our production company in 2006, we called it Eggdancer Productions. We called it that because for us as Saudi women, the film work we were doing was extremely rare and delicate – like walking on eggshells.

But now, more than a decade later, we and other Saudi women are moving forward with much more confidence than back then. In Saudi, there is a buzz in the air – you can feel it. The change I believe is for real – for all Saudis, but especially for us as women.